A 7mm scale (O Gauge) model of an Andrew Barclay 0-4-0 fireless locomotive.  The model includes a few of the castings from the Eric Underhill kit but it is almost entirely scratch built, including the footplate, cab buffers and buffer planks, steps, dome, exhaust, cylinders, valve gear and cab interior and other details.  The wheels were cast in brass from my pattern and press-fitted with steel tyres for split-axle pickup.  The only drawings that I could find at the time were simple outline side and end elevations on page 85 of the paperback book 'Fireless Locomotives (Locomotion Papers, number 97)' by Allan Baker and Allen Civil, The Oakwood Press, 1976.  I measured up the wheels of an Andrew Barclay 0-6-0 fireless at Haverthwaite to make my pattern for casting.

Calderstones was built for the Calderstones Certified Institution for Mental Defectives in 1925 for work at their hospital in Whalley, near Blackburn in Lancashire.  Originally called Farnham Slade, the locomotive was renamed around 1929 when the name Calderstones Hospital came into use.  Although the prototype was scrapped in January, 1952, similar locomotives are preserved, such as No. 1477 and No. 2243 at the Buckinghamshire Railway Centre, and No. 1984 at the Foxfield Railway.

A conventional arrangement of outside cylinders and inside Stephenson's valve gear. 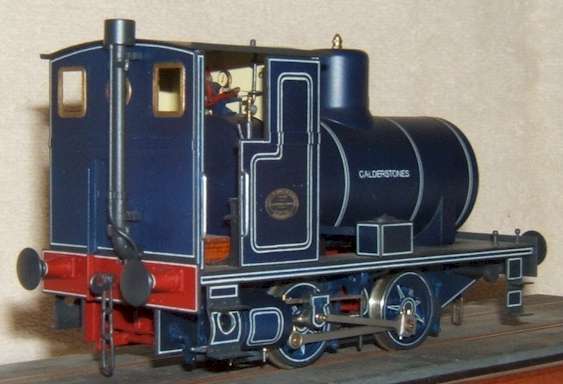 The cylinders are usually at the rear of a fireless locomotive because there is no need for them to be at the front to induce the draft up the chimney of a fire-tube boiler, as in a conventional steam locomotive.  Exhaust steam is passed from the cylinders to an exhaust pipe at the rear of the cab; the small pipe drains condensation away.