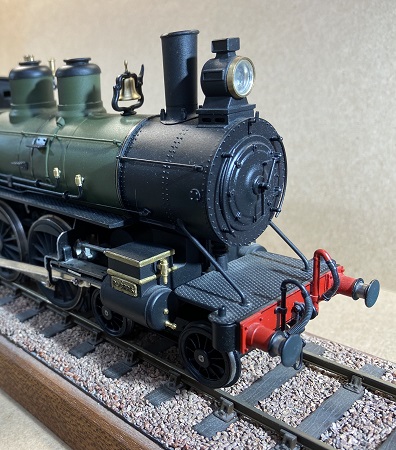 Towards the end of the nineteenth century, there was a shortage of locomotive building capacity in the Britain so the Midland Railway, for example turned to the Schenectady Locomotive Works and The Baldwin Locomotive Works to build 2-6-0, who also supplied similar locos to the Great Northern Railway. The Rogers Locomotive and Machine Works, based in Paterson, New Jersey, had built the well-known and successful Illinois Central Railroad No. 382 (of Casey Jones fame) and mused that they might rework the design for the British market, but without undertaking any market research to see if there was much need for a swift 4-6-0.

In reality, whilst I was working and studying in the USA about forty years ago now, it was not long before the urge to build models again came over me but, without my workshop, I bought a Rivarossi plastic kit of Illinois Central Railroad No. 382 and set about building it, more or less ‘out of the box’.  I chose the un-motorised kit with a view to fitting Finescale tyres to the plastic wheels one day (the motorised kit contained wheels fitted with rather coarse tyres, and reputably a very poor motor/gearbox). 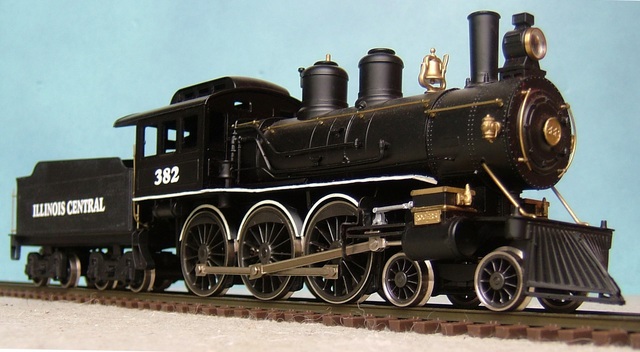 A typical ‘out of the box’ build of the motorised kit, but not mine

After a year or so, I was most grateful to be lent a Unimat 2 so that I could turn off the flanges of the plastic wheels and to make all sorts of little parts for other models that I built whilst I there.  Later, I gained access to a sizable South Bend lathe and I was able to machine up some suitable steel tyres. 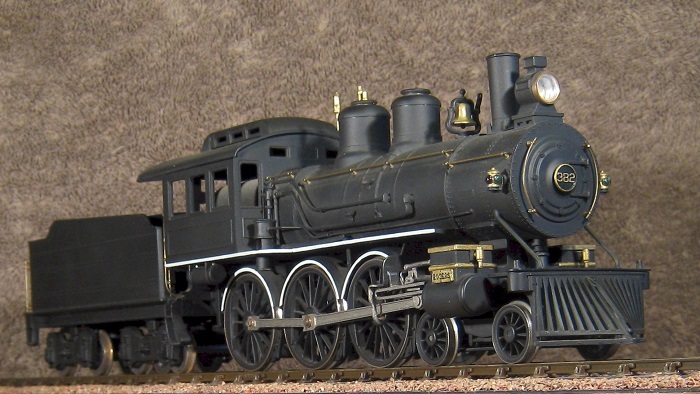 My model fitted with steel tyres

My model sat on a shelf in this condition until about fifteen years ago when I decided that, for light relief from time to time, I would Anglicise it. I started off with the buffer planks, buffing gear and hoses, progressed through water pickups on the tender, toolboxes, vents – all very light-hearted and with no constraints from drawings or photographs. I removed the cupola on the cab roof and reworked the injectors, steps, whistle, bell, smokebox dart, and so on to give a less North American appearance.

I made steel axles, with D-shaped ends, to be a good press-fit in the matching holes in the driving wheels; the bogie and tender axles are plain.  Machining the D-shaped ends on the axles was satisfyingly straight forward: I retained the blank axles within a rectangular bat that I clamped to the milling table so that I could machine the first flat, before turning the bar through 90 degrees to machine the second flat on the other end, thereby ensuring the quartering (and making sure that I quartered all three axles the same way!). 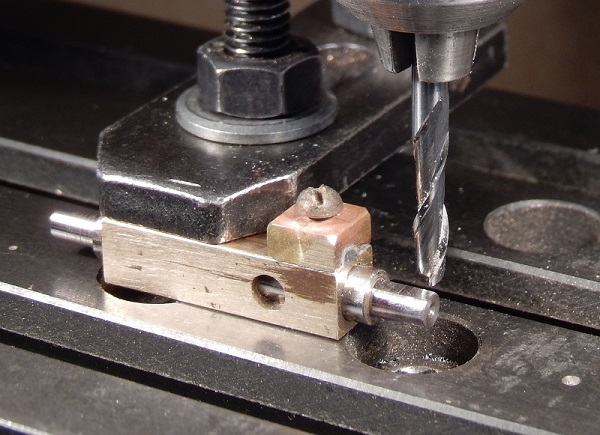 I fitted a medium size motor gear/box from Finescale Brass, which was a bit of a change of plan that involved milling away some of the underside of the boiler on the already painted model; it was a first, but I got away with it.

Milling away part of the underside of the boiler to accommodate the motor/gearbox; I supported the assembly on a piece of wood through the chimney and on packing at the cab

I have never started painting a model before I have completely finished and thoroughly tested it but I wanted to get on with it in this case (due to rapidly deteriorating health) and show my progress.  I have yet to fit electrical pick-ups, make new motion plate and sidebars, further tidy up around the cylinder area and possibly arrange for a new Rogers nameplate.  I have thought about some branding but thinking is as far as it went.  Perhaps one day, somebody will pick up this project and finish it off.