Replacing Gear Teeth
From time to time, I am contacted by an antique clock dealer in the neighbouring village, this time to replace a couple of broken teeth on a clock spring barrel.  I set the job up in the 4-jaw and on the rotary table to mill out slots for the roots of the replacement teeth.

I then pressed in two pieces of brass as embryo replacement teeth and silver soldered them in place. Back in the 4-jaw, I milled down the teeth

leaving them a little oversize for the dealer to finish off, as he didn't bring me the clock with the mating lantern pinion to try them against 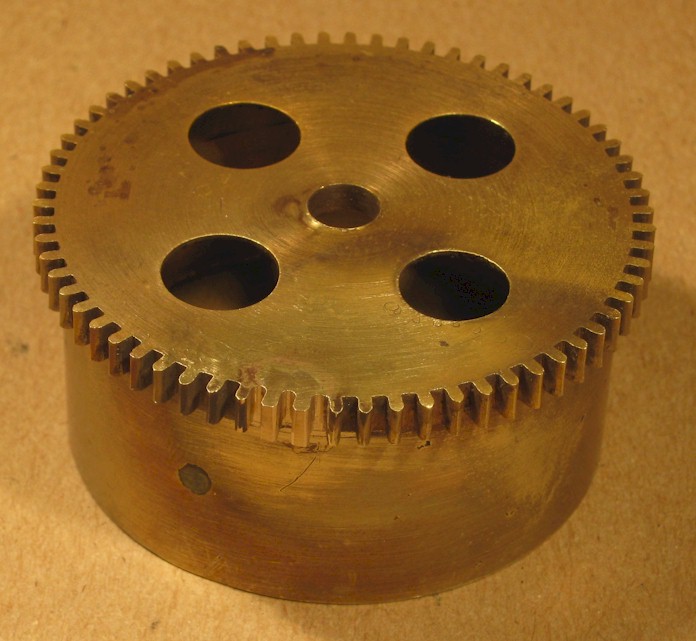 Repairing Gearwheel Spokes
The antique clock dealer brought me a gearwheel from a Dutch clock that needed the spokes repairing.  The pawl of the winding ratchet engages on the spokes but, after all the years, had machined them away so that its purchase was unreliable.  I machined away the damaged part of the spokes, which required some care as one of the spokes was already cracked, and silver soldered in some nickel silver inserts; I am confident that these will last!

Gearwheel from Dutch clock before (left) and after repair (right)

Remachining Pivots + Fitting New Bushes
The the movement of an early 19th century longcase clock needed some pivots remachining and new bushes fitted.  The pivots for great wheel arbours for both the striking and the going trains needed to be cleaned up by turning; this required holding the job in a fixed steady at the wheel end but I had to create a temporary centre to support the arbour at the end with the winding square. 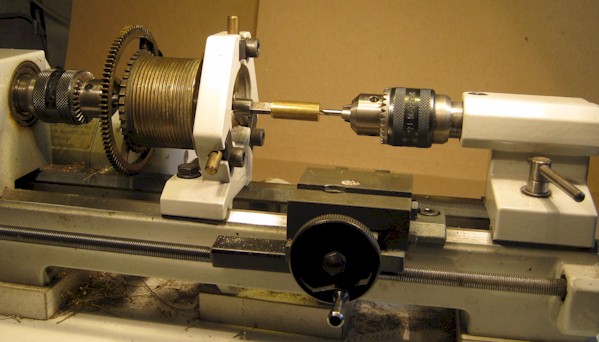 The job supported in the fixed steady running on the worn pivot (above), a brass cap has been pressed onto the square and is being centre-drilled. 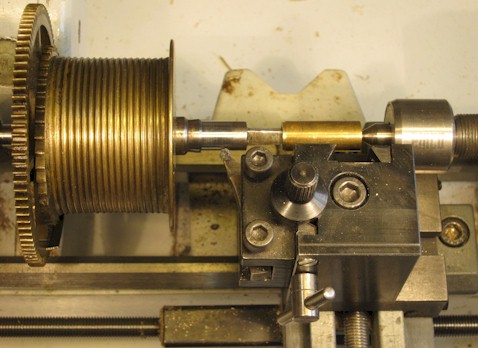 With the end supported by a live centre in the tailstock, the pivot is cleaned up. 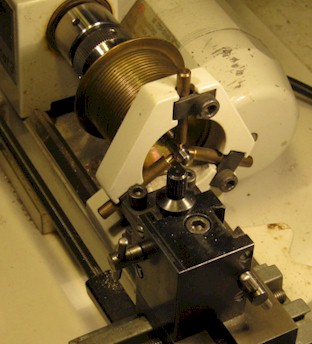 With the great wheel removed, the shoulder of the arbour at that end runs in the fixed steady and the pivot is cleaned up. 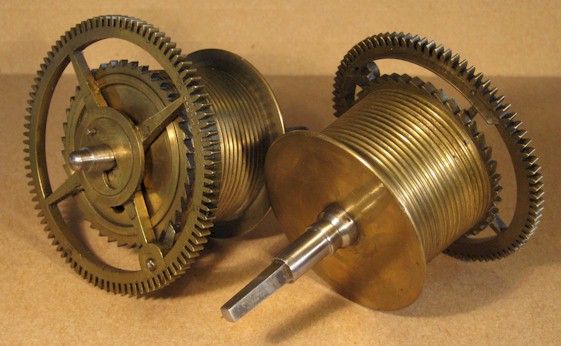 The finished pivots, with the great wheels replaced. 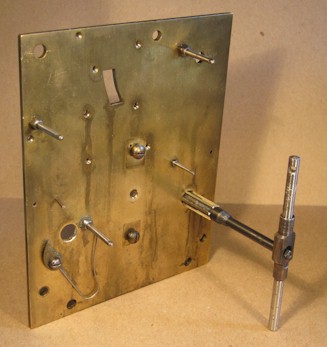 Opening up the bearing holes with an expanding reamer to take bushes. 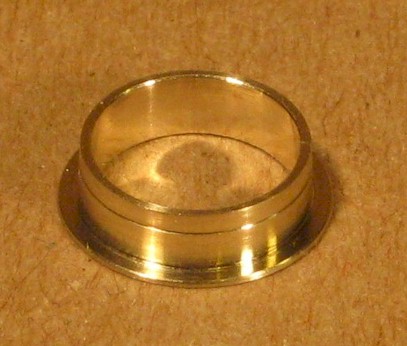 One of the bushes turned up and ready to be pressed into the clock plate. 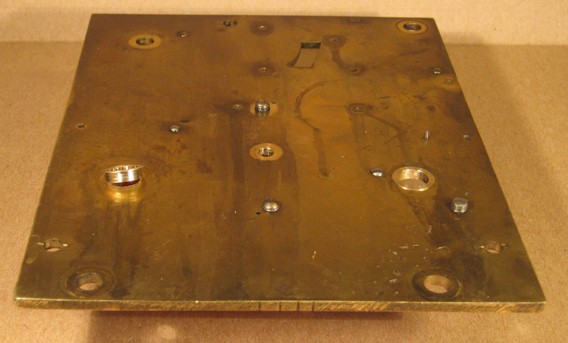 One bush (right) pressed into the plate and the other (left) being placed. 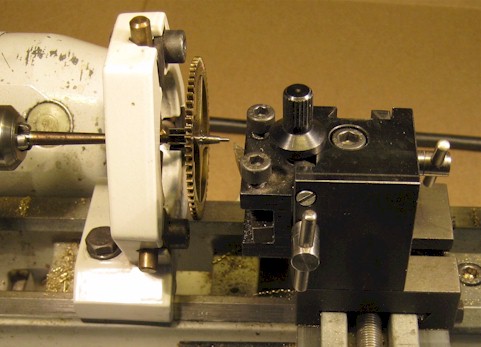 Turning the pivot at the rear end of the centre wheel arbour. 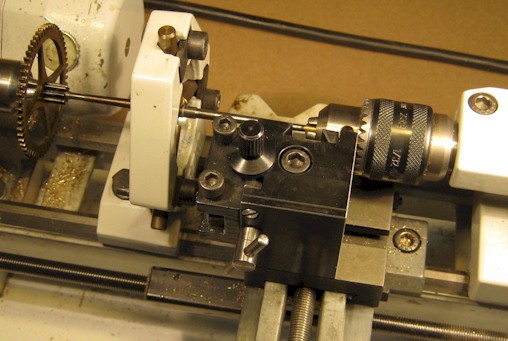 Turning the pivot at the front (ie hand) end of the centre wheel arbour, using the additional support of a hollow plain centre in the tailstock.

Making a Ratchet Wheel
I made a new ratchet wheel for a skeleton clock from the late 19th/early 20th century.  The antique clock dealer brought me an example that was approximately 20mm in diameter and he asked me if I could make a larger one to suit the clock.  I first made a crude model in thin card, with just a couple of teeth, to check upon the overall diameter (46mm) and the depth of the teeth (3mm) that would suit the pawl - or the ‘click’, as they are called by horologists, I am told. 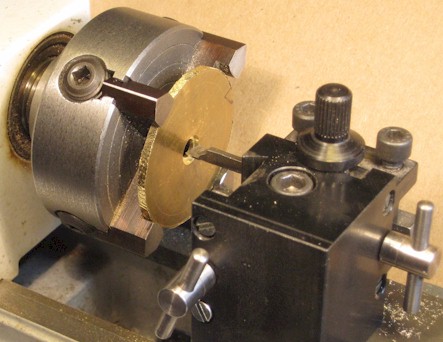 Machining the counter-bore of the 2mm thick brass blank that was roughed out by hand. 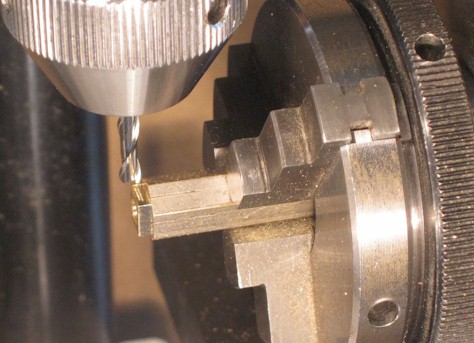 Finishing the mandrel to hold the wheel blank for machining. 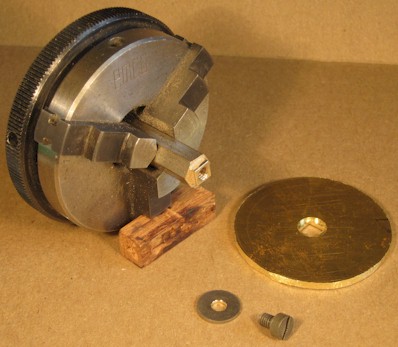 The prepared blank ready to be attached to the square mandrel with a screw and washer. 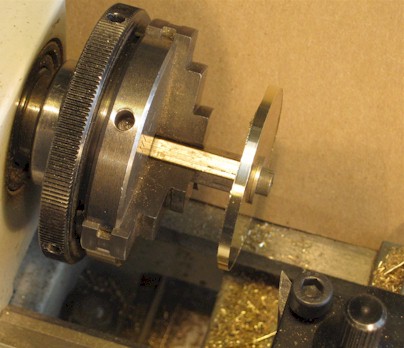 Turning the blank to the overall diameter. 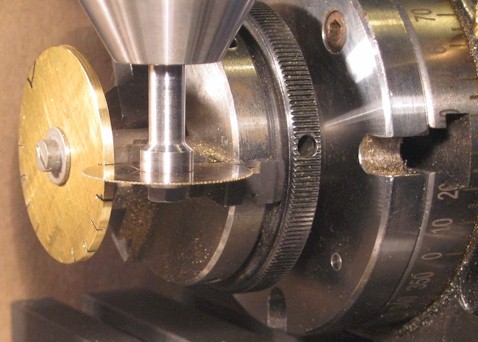 Cutting the working face of the teeth with a slitting saw. 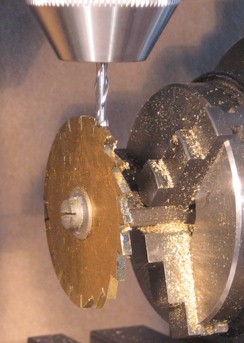 Removing the bulk of the material with a slot drill to avoid the lengthy saw cuts along the backs of the teeth. 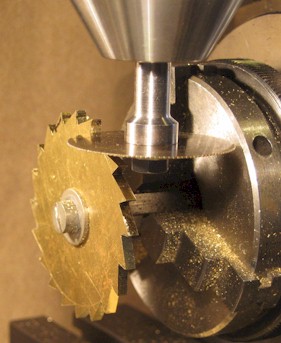 Final removal of material from the backs of the teeth with a slitting saw. 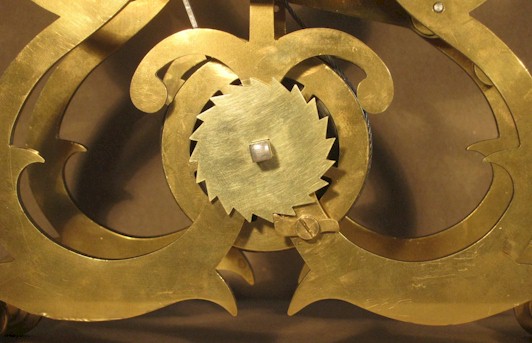 The finished ratchet wheel in place on the clock.

Actually, ratchet wheel is a bit of a misnomer in this application because, despite the square on the end of the arbour, the clock is not wound here but on the square above it, which drives the fusee.  Once the clock is assembled and the cable between the fusee and the spring barrel has been correctly set up, the pawl (click) is screwed tightly in place and the ratchet wheel never turns again but merely prevents the arbour from rotating (so the spring may be wound by turning the barrel via the cable and fusee. This Wikipedia page illustrates and explains the principle of the fusee). 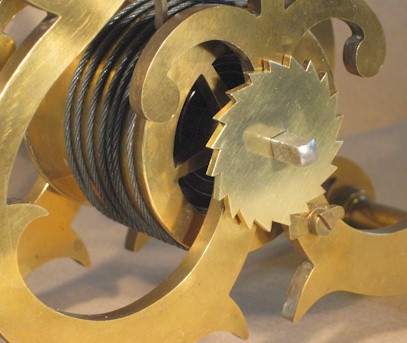 So, after all that work to create 20 perfect teeth, only one is actually used and the remainder are effectively just ornamentation!  But the antique clock dealer was satisfied.

I originally prepared these write-ups for a Gauge 0 Guild forum topic 'In the DLOS Workshop'.

Back to Workshop Machine Tools