A 7mm scale (O Gauge) model of a 0-6-0 diesel mechanical locomotive with jackshaft drive built by Hudswell Clarke of Leeds in 1958 for the National Coal Board and delivered to the Cadeby Colliery, Conisburgh near Rotherham, Yorkshire. It was later transferred to the nearby Elsecar Main Barnsley and New Stubbin Colliery but was scrapped in 1986, by Booths of Rotherham or Hartwood Exports, when the colliery closed.  (Further details of the prototype locomotive and the diesel engine) 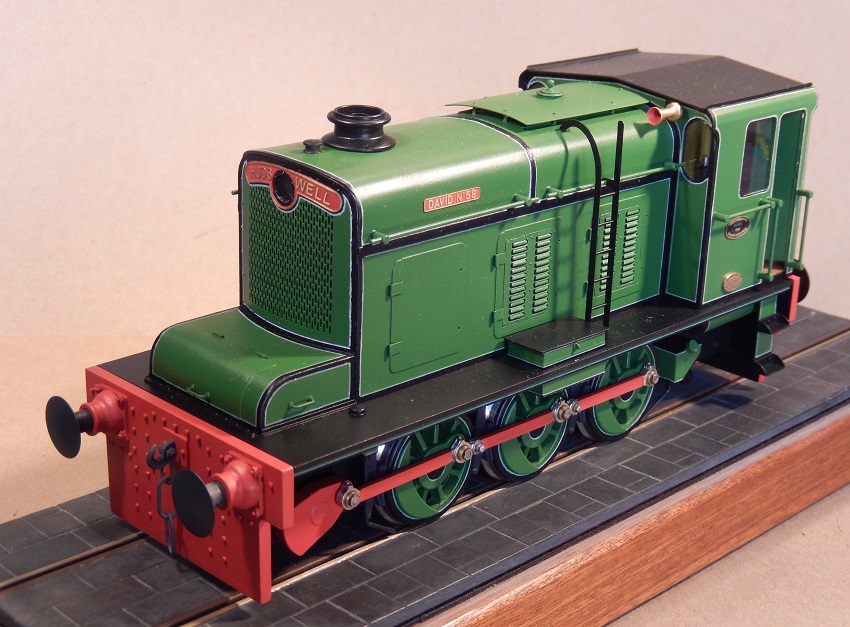 I decided to build this model (even though I would not normally show much interest in diesels, other than old shunters) because my wife bought me one of the nameplates from the prototype as a birthday present a few years ago.  I always look upon even the best of kits as an aid to scratch-building, recognising that some kits are more of an aid than others and that some are of no aid at all.  The Mercian Model Rail kit DL 3 is certainly an aid and a good starting point, and Trevor Cousens is a very helpful chap, a real gentleman (so if you have any issues with his kits, do speak to him first), who put together a suitable kit for me.

In summary, I fitted Slater's wheels and a Fine Scale Brass motor/gearbox but I also made a fair number of scratch-built additional and replacement components, including flycranks, air cylinders and sandboxes, that I describe here.

With a view to potentially helping others, rather than give a blow-by-blow account, I thought that it would be helpful to point out some of the ‘sharks’ in this kit that might bite you if you are unaware; I am quite eagle-eyed when it comes to this sort of thing but two still got me and I just had to put up with one and concoct a less than ideal work-around for the other but I could have avoided both had I known about them earlier.

As I build my models, I think about how I am going to paint and line them so I tend to make them in modules that may be screwed together after all the ‘decoration’ is finished (it amuses me to read some kit instructions that would have you solder everything together and then, as a last instruction, say ‘now all you have to do is paint it’ – Hmm, professional painters do have words to say about this).

Moving on to my chosen mods: 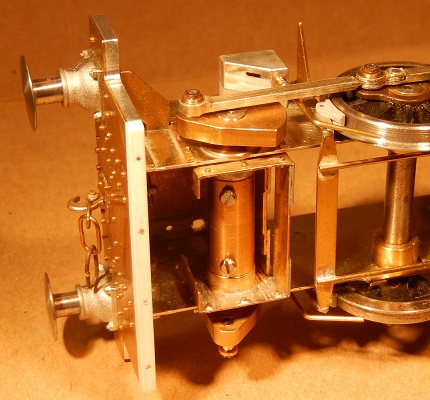 After all the work, there are relatively few assemblies for the body to bring together after painting and lining, most are screwed together but a few small items are glued with epoxy resin (eg seats, window glasses and ladder, not shown in the photograph, below). 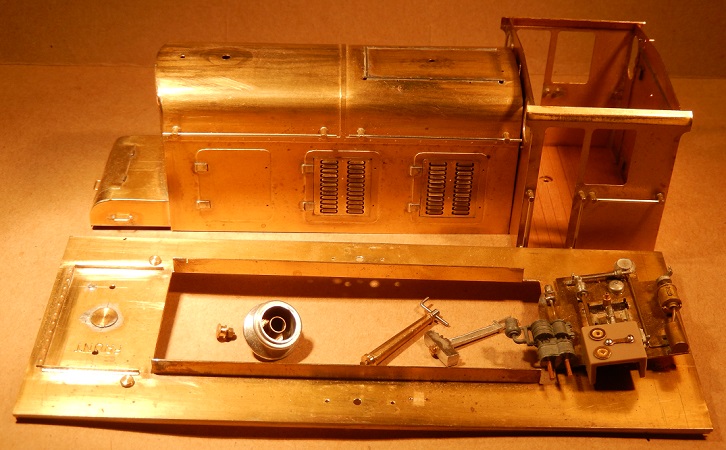 Suspension – The frames in the kit are designed for a ‘rigid 0-6-0 chassis’ but I fretted out the axle bearing holes to be inverted U-shapes and then I closed them at the bottom with hornstays for CSB (continuous springy beam) suspension. Although I have not used it before, it does seem to be effective.

Lights - I fitted 3mm diameter yellow LEDs as head and rear lamps, although I had to machine the rear one down in length and in diameter to allow it to fit inside the lamp housing. A good friend, knowledgeable in all things electronic, kindly knocked out a circuit for me with a bridge rectifier, voltage regulator and a 0.47F capacitor that keep the lights on for a good ten minutes, once lit by the initial movement of the loco.

A weekend away - Although I was working on the HMRS stand at the Warley National Model Railway Exhibition (held annually at the NEC Birmingham), I also belong to the LOGGIES and I was delighted to be invited to bring my model to run on their layout, Central Works, which was exhibited there in 2018.

The loco had a 204HP Gardner engine (an 8L3). The mechanical transmission, using a scoop control fluid coupling and three-speed Power-flow SSS (synchro-self-shifting) gearbox, was a Hudswell Clarke speciality (so although this loco is usually referred to as 0-6-0DM it did not have a conventional mechanical transmission).​

By 1985, David No. 58 was awaiting the fitting of new fluid coupling in its transmission because it had been damaged by being left ticking over with the coupling (scoop) left in the drive position. A replacement fluid coupling was obtained and was placed on the shed floor next to the loco but the repair was never undertaken. The loco was scrapped in 1986, by Booths of Rotherham or Hartwood Exports, when Cadeby Colliery closed. The8L3 Gardner engines from these old Hudswell Clarke locos were a prized item with scrap merchants and Hartwood Exports sent them to China for use in junks. (I love the idea that the Gardener engine from David No. 58 might have seen a new life on the water in the Far East … and still be going.)​