Airedale was the first of the 27 'standard class' 15" by 20" 0-6-0ST locomotives built by Hunslet of Leeds between 1923 and 1947.  She was delivered to Airedale Colliery in North Yorkshire in July, 1923 and worked in the region until the mid 1970s when she was withdrawn with a view to rebuilding and restoring her to her original condition on the Yorkshire Dales Railway.

Inspired by published photographs of Airedale (Industrial Steam, Bradford Barton and Industrial Steam, Ian Allan) and later a visit to the Embsay and Bolton Abbey Steam Railway where it is stored, I chose to model her in her LMS livery of the late 1960s, by which time she had acquired a number of features that made her rather non-standard but more appealing as a model.  Most notable are the Wakefield lubricators on her left hand running plate, which are driven from a return crank on the centre driving wheel.  These actually work; well, they don't actually pump oil, but each contains a 3mm diameter ratchet wheel and pawl spring so that the hand wheels rotate stepwise rather than just oscillate to and fro.  This was not my original intention but a neighbour commented that oscillating lubricators were easy enough in 4mm scale, in 7mm scale they ought to work; so, I rose to the challenge.  The same neighbour produced about 40 colour photographs of details of Airedale, in partially dismantled condition, and of other standard Hunslet locomotives (see the example on the Gloucester and Warwickshire Railway), so I felt I really ought to do rather more than just assemble the very straight forward kit.  Numerous alterations and additions were necessary, but I will mention only the most obvious or those that I found particularly challenging or pleasing.

The return crank to drive the Wakefield lubricators required a special crankpin, but whilst I was at it I removed the coupling rods, drilled out all the integrally moulded crankpins and bushed the holes.  I plugged the holes in the crank bosses in the wheels and drilled and tapped them 12BA to accept my standard crankpin arrangement of 12BA screws, tophat bushes and 14BA nuts opened up to 12BA.  Thus, I have achieved robust metal crankpin bearings whilst retaining the excellent moulded coupling rods.  The return crankpin, which drives the lubricators through a set of links, is retained at the correct angle in the wheel boss by a special tophat nut, let in from the back of the wheel, which is tightened with a small peg spanner.

As the first of the class, Airedale does not have the single, long tank to smokebox flange that is characteristic of the production run, rather it retains the two smaller separate flanges that were characteristic of the earlier Hunslet locomotives.  Removing the representation of the single flange from the tank was relatively easy but removing it from the smokebox without loosing the subtle shape of the rear beading was much more difficult.  The moulding of the smoke box was so accurate that I was able to machine away the representation of the flange by 'picking up' on the exposed beading on one side and carrying it through to the other. I turned a wooden mandrel to mount the open (ie boiler) end and supported the centre of the smokebox door with a running centre in the tailstock.  The machining had to be done by hand, a part revolution for each cut, as the flare on the smokebox saddle prevented machining complete revolutions.  Although this procedure took some time, the result was near perfect and produced a continuous beading that passes behind the two new small flanges. 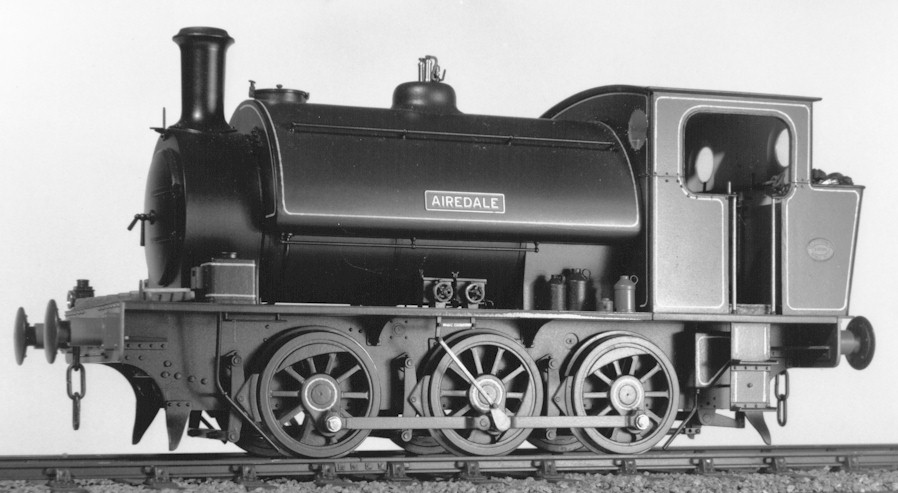 Unlike that on members of the production run of the class, the tank filler on Airedale is further forward and opens away from the chimney.  I was able to retain the moulded lid but the turret, which was integral with the upper tank moulding, had to be filed away and a new one turned up and fitted.  Other original differences, such as the rounded edges to the buffer planks, the beading to the cab side sheets and larger sandbox lids and bases, were more easily achieved.

Modifications that Airedale probably acquired during her working life, such as different draw plates, short safety valves, front steps on the running plate on the right hand side, pockets on the sandboxes (for holding miners lamps, the battery fits in the pocket and the lamp clips on a loop on the front.) and patch plates on the side frames, were also modelled.  The large buffers presented a problem as I wished to retain the excellent springing arrangement but was certain that simply attaching larger heads would not suffice.  I elected to machine new heads from large drawing pins that had been silver soldered onto 1/32" diameter steel rods. The original plastic buffer heads were drilled and machined to accept the rods and large heads, and representations of the rivets that held them together were added.  The buffer stocks were drilled out to clear the 1/32" diameter tail rods that protruded beyond the foam rubber springs so that the buffers could be assembled as originally intended.  Thus, I was able to retain the original springing arrangement but achieved secure buffer heads that would not droop as they were supported by tail rods.

Some additional detail that I chose to add included representations of the cylinders and drain cocks, inside motion (in the space between the frames below the boiler), sand pipes and sanding gear operating rods, window glasses, open roof ventilator, and full in-cab detail (with all that photographic information, how could I not?).  As my model operates on an outdoor railway and will be well handled, I enclosed the axles and gearbox with a cover plate and replaced the plastic hand rail mouldings with 4mm scale handrail knobs opened out to accept handrails made from suitable piano wire.  Working from the published photographs, I made up the details such as the lamps, oil cans, shunter's pole, shovel and ladder that adorn the running plate and add character to the model.

I can confirm that removing the axles and motor is not a problem with the design.  Having dismantled the working chassis to make modifications, I replaced the remnants of the heat sealing lugs with 12BA studs and retained the motor and electrical pickup assembly with washers and nuts.

I used a Badger 150 airbrush to apply Humbrol paint and a Bob Moore lining pen to apply the lining; only the black edging was brushed.  I lined the wheel bosses by mounting the wheels between plastic centres in the lathe (Unimat 3), placing the lining pen on a steady in the toolpost and gently turning the wheels by hand.  All the surfaces were sealed using Floquil flat finish.  The model is assembled by screwing together all the major component parts (only the two parts of the tank are glued together); this required quite some planning and extra work but made the painting and lining so much more straight forward.